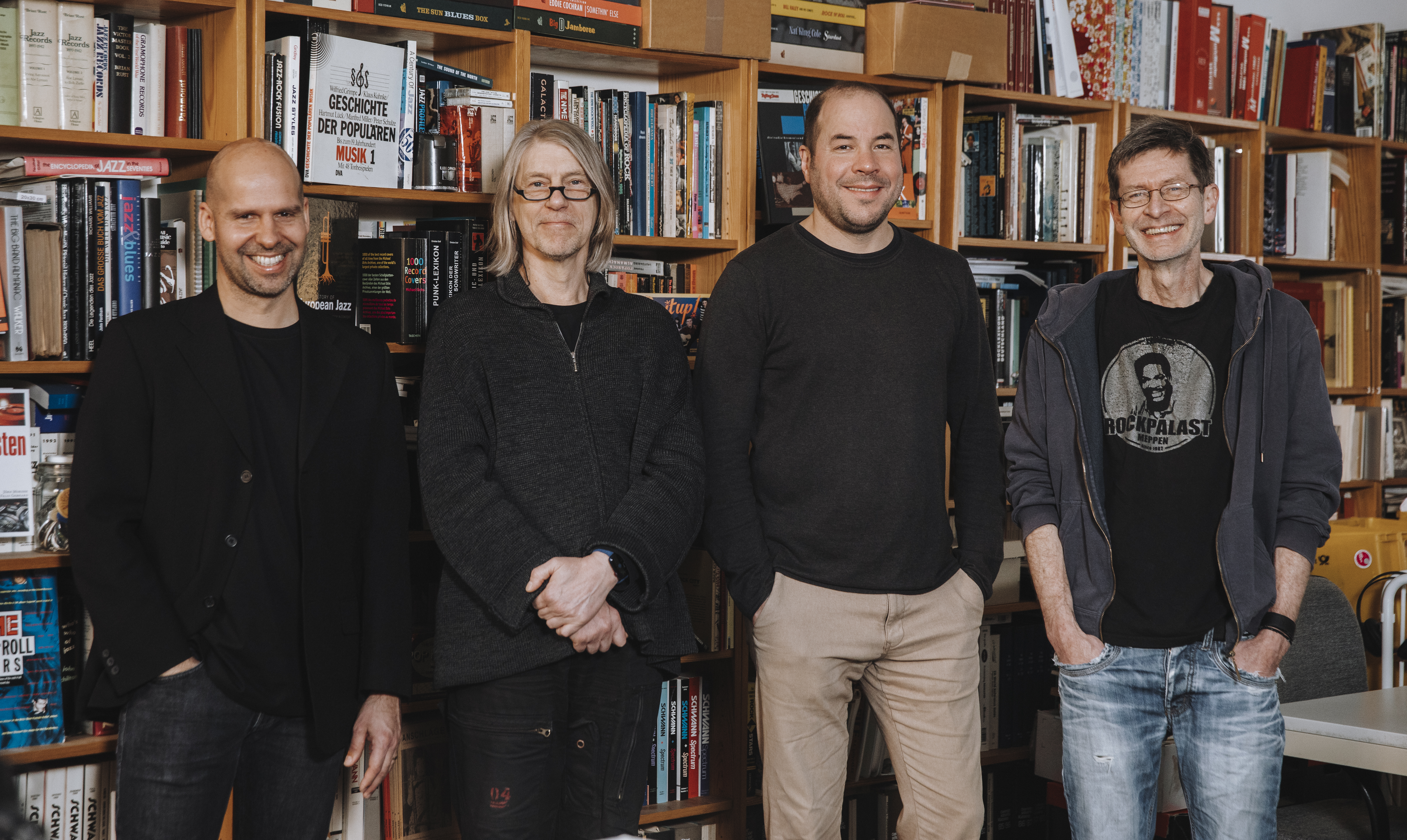 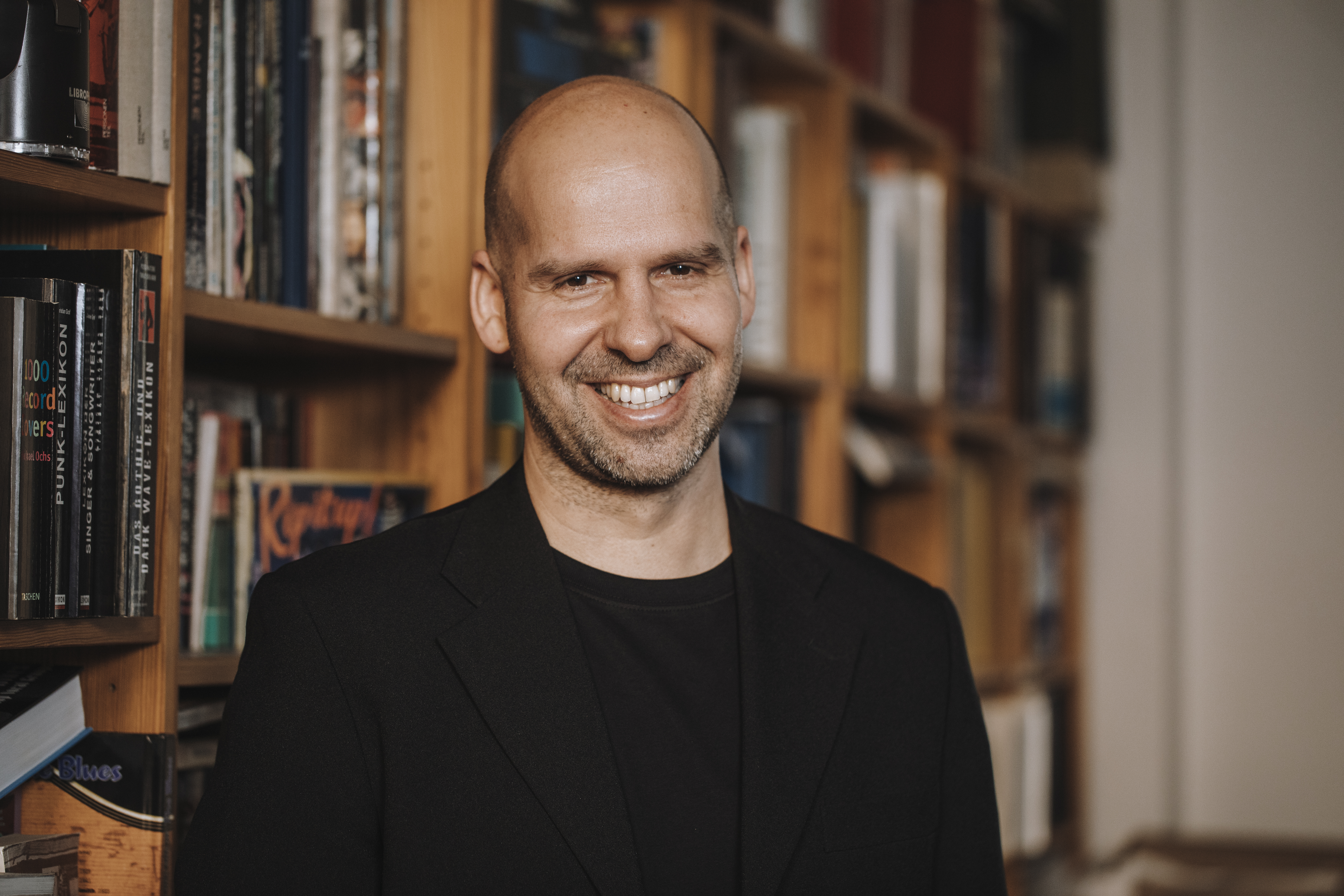 Nico Thom
Head of Institute
Nico Thom (*1978 in Altenburg/Thuringia/Germany) studied musicology, philosophy, science management and higher education at the German universities of Leipzig, Halle/Saale, Jena, Oldenburg and Hamburg. He has researched and taught at the universities in Leipzig and Klagenfurt (Austria) and at the universties of art and music in Weimar, Rostock, Lübeck, and Hannover. He also worked for a time at the Lippmann+Rau Music Archive in Eisenach, an internationally oriented foundation archive for jazz and popular music. He also worked for many years for the Germany-wide Network of Music Universities, which is dedicated to the topics of quality management and teaching development. Since January 1, 2022, he has been director of the Klaus Kuhnke Institute for Popular Music at the Bremen University of the Arts. In addition to his activities in research and teaching as well as in archive and academic management, he acts as a (jazz) musician under the stage name Thomonic.
More information: https://www.nico-thom.info 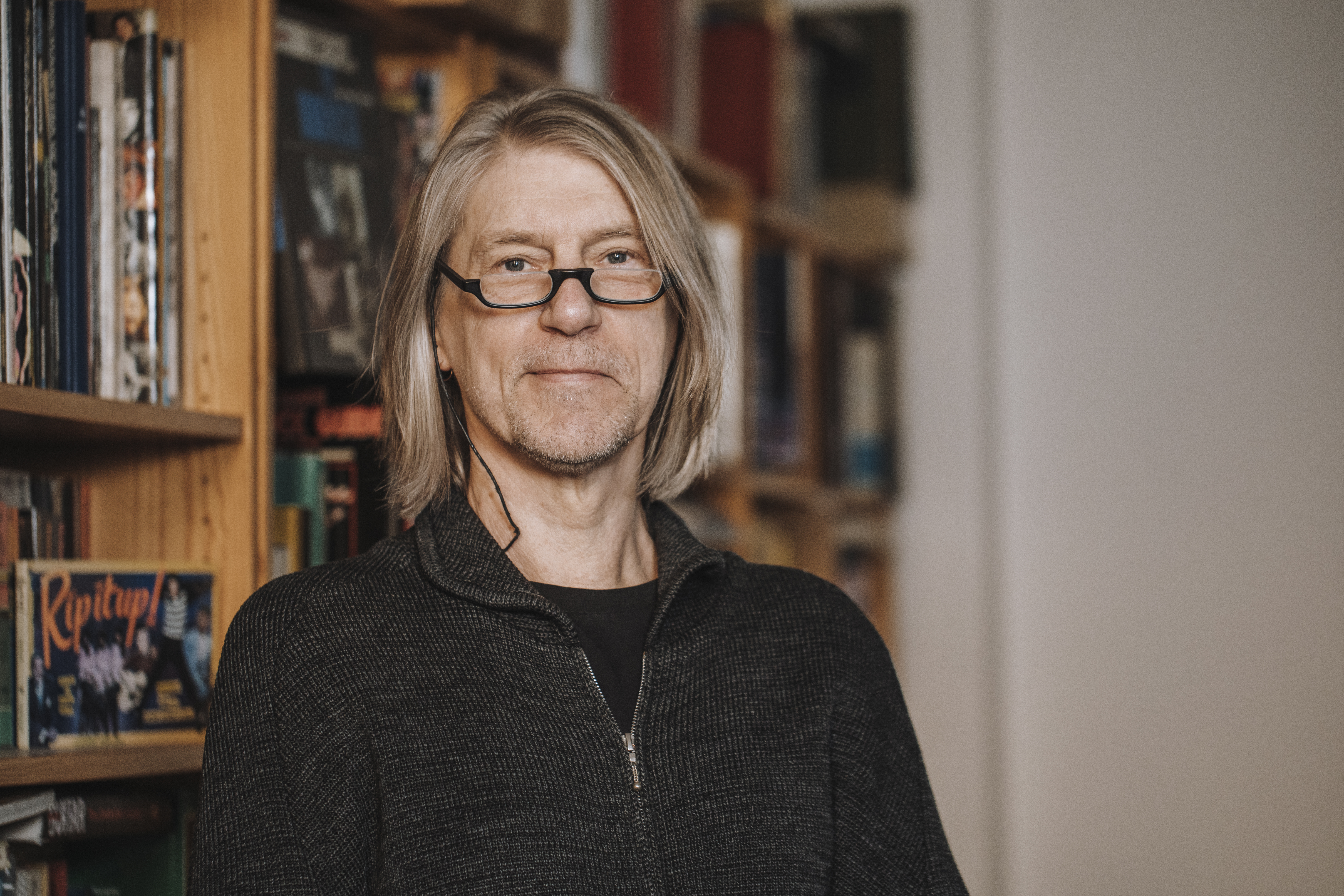 Andreas Herrmann
Responsible for music-related journals & magazines as well as music technology
Andreas Herrmann (*1958 in Bassum/Lower Saxony) graduated from the University of Bremen with a teaching degree in music (Sek II) and subsequently worked for many years as a teacher at a Bremen high school and as an employee of the Bremen State Institute for Schools (LIS). Since the mid-eighties, he has been intensively involved with music technology and computer-aided music production, respectively. Since 2017, he has been a teacher for special tasks in the area of practical school instrumental playing (piano & guitar) at the Bremen University of the Arts, as well as a part-time employee at the Klaus Kuhnke Archive/Institute, where he is responsible for journal and magazine acquisition.
More information: https://www.hfk2020.de/de/personen/lehrende/andreas_herrmann.php 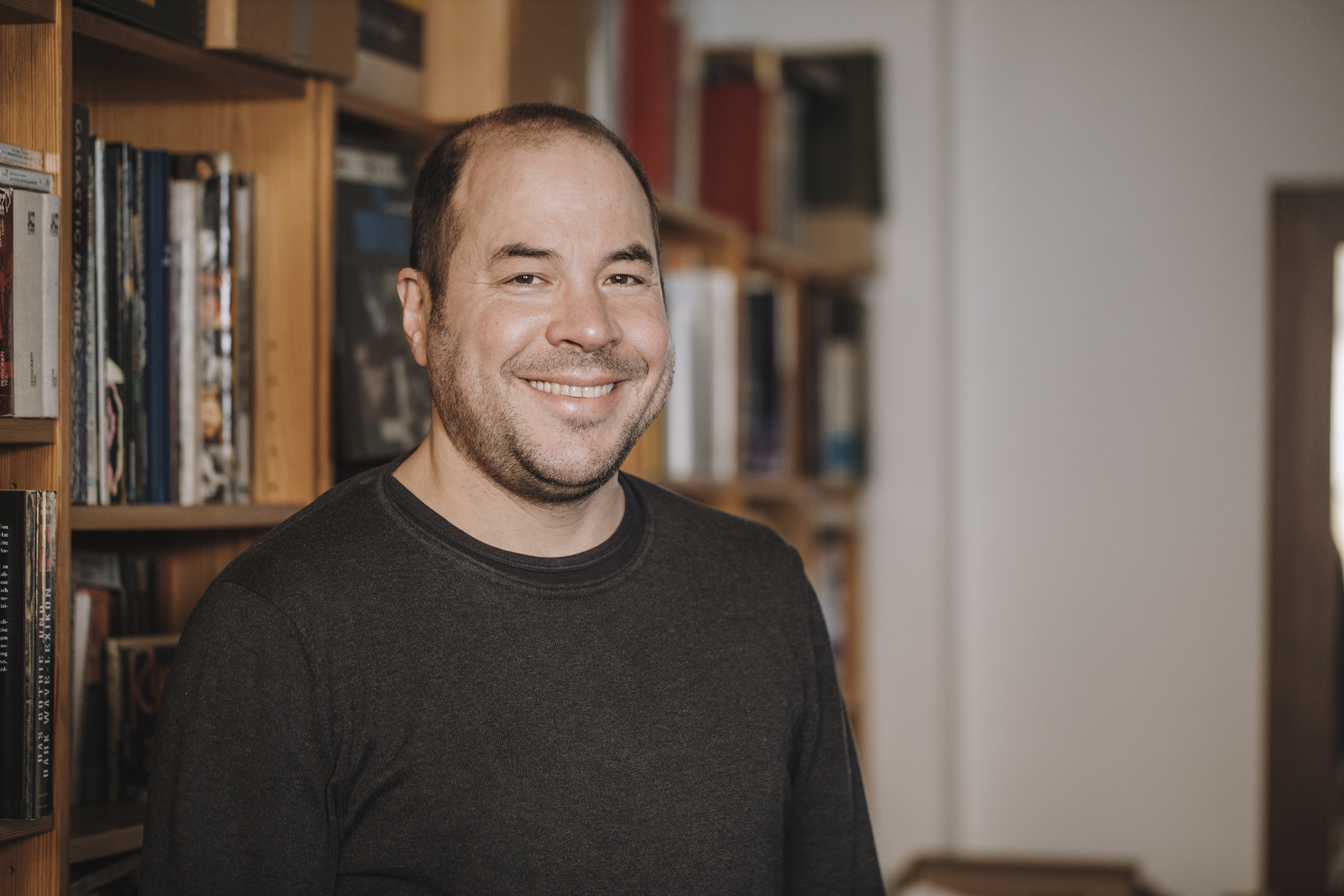 André Feldhaus
Responsible for music-related technical & non-fiction books as well as film music
André Feldhaus (*1975 in Münster/North Rhine-Westphalia) studied theater, film and television studies as well as German and English at the universities of Bochum, Liverpool and Bremen. Classical music training on the piano and participation in composition competitions and courses. Founding member of a punk band with subsequent publications and tours. Parallel to this, first experiences in the field of sound and sound design for film, television and theater. Since the end of the nineties he has been working as a freelance composer for film, television and theater and as a part-time employee of the Klaus Kuhnke Archive/Institute, where he is responsible for the collection of specialized and non-fiction books and looks after the film music collection.
More information: http://www.andrefeldhaus.de 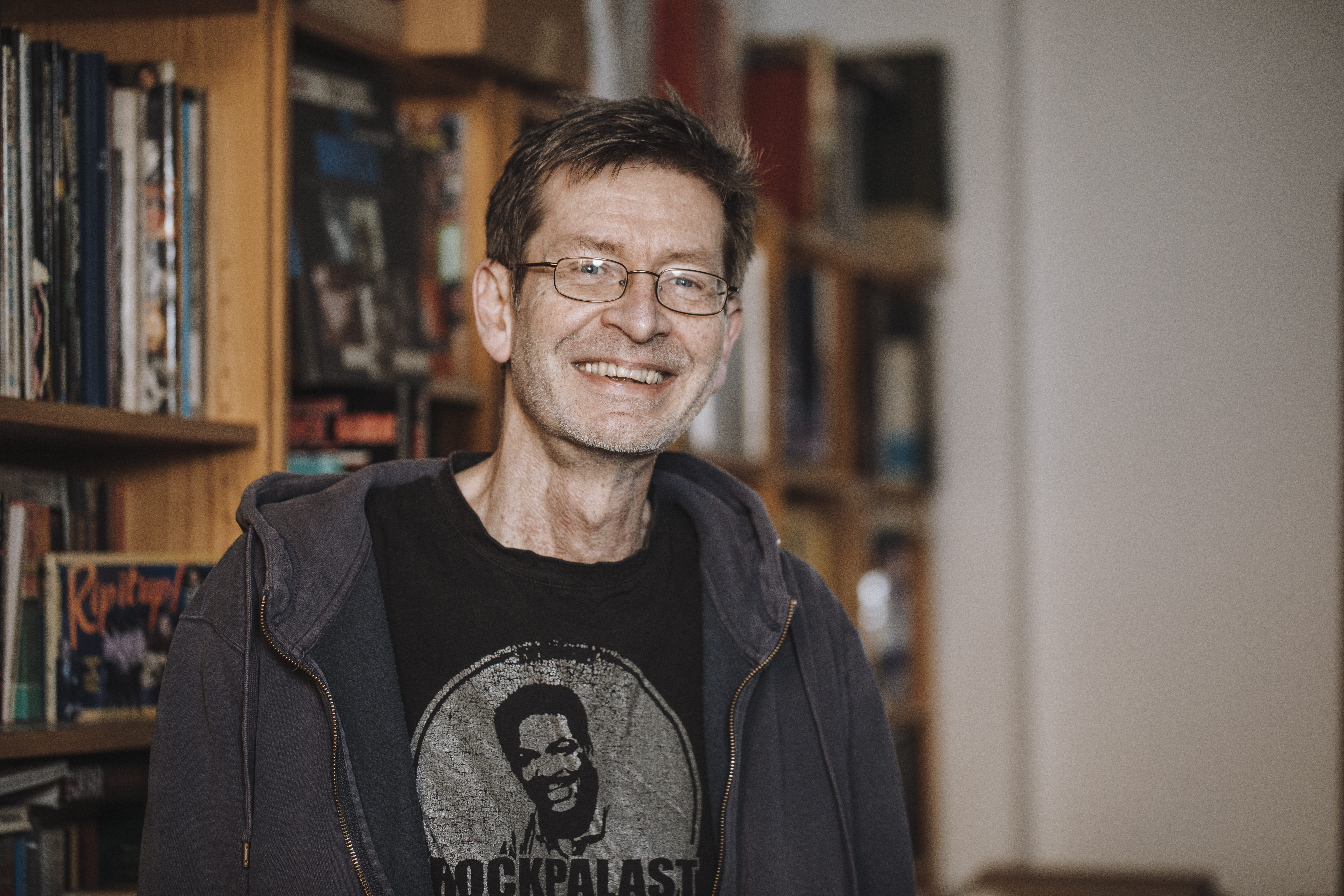 Till Neurath
Responsible for sound carriers as well as the sale of doubles of all kinds
Till Neurath (*1963 in Dortmund/North Rhine-Westphalia) studied business administration at the University of Dortmund and mathematics at the University of Bremen. Later, he trained as a specialist for media and information services (FaMI) at the Klaus Kuhnke Archive. In the eighties he was active in the Dortmund and Bremen punk scene as the owner of a D.I.Y. mail order company and several record labels. Since the beginning of the twenties he runs a trade for music and entertainment media on the internet. As a part-time employee he has been working for the Klaus Kuhnke Archive/Institute since the mid-nineties, where he takes care of the collection and maintenance of sound carriers as well as the sale of doubles. 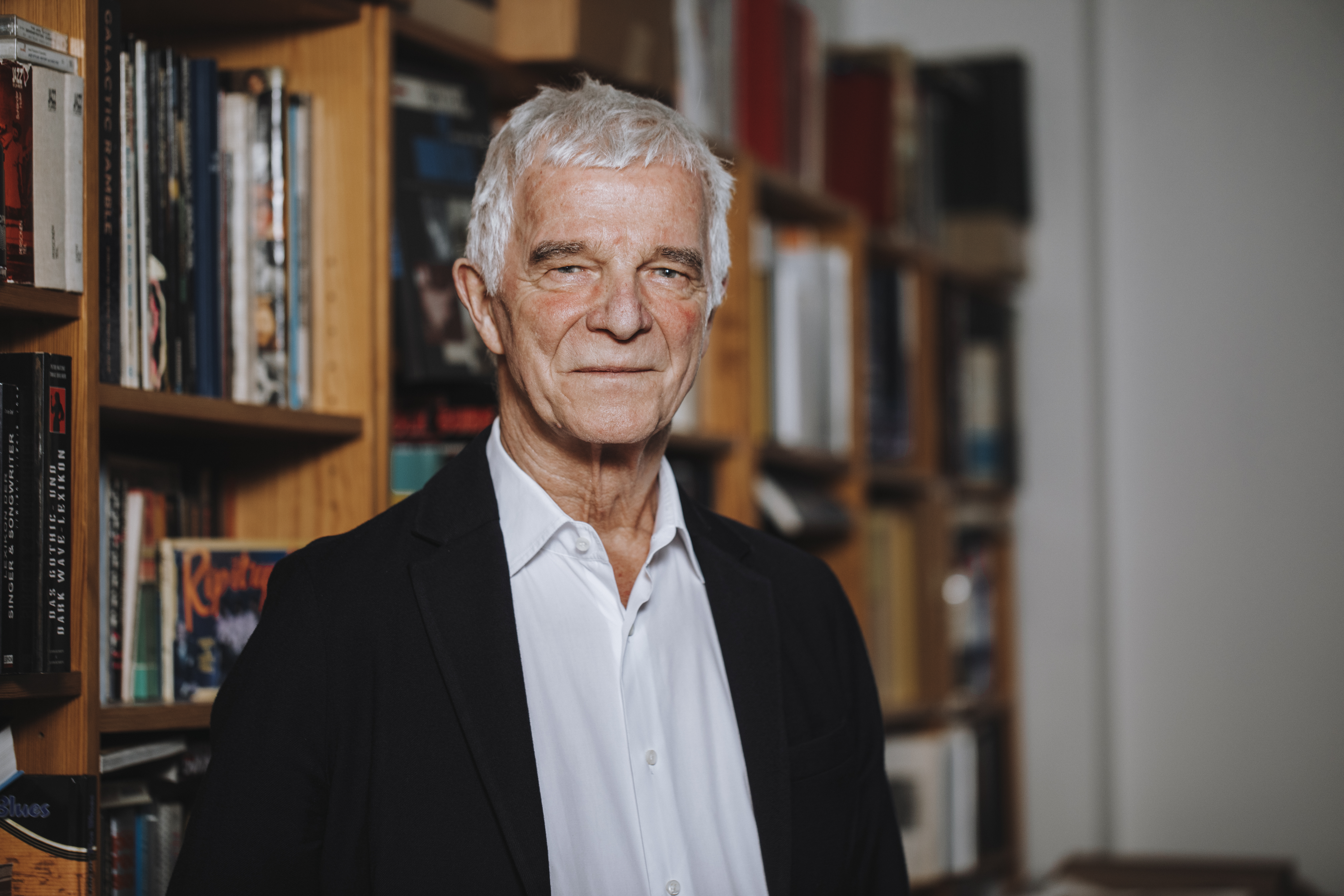 Peter Schulze
Spiritus Rector of the Archive/Institute as well as renowned broadcast journalist, festival & concert hall director
Peter Schulze (*1947 in Bremen/Bremen) first studied sound engineering and composition at the Berlin University of Music before becoming jazz and pop editor for Radio Bremen in 1970 (until 1998). In 1975 he co-founded the Bremen Klaus Kuhnke Archive/Institute (originally Archive for Popular Music) and has been its spiritus rector for decades. For three years he worked as head of music for the cultural program of Radio Bremen (until 2001). From 2003 to 2007 he was Artistic Director of the JazzFest Berlin, was a member of the board of the Europe Jazz Network until 2010 and has been active in the artistic direction of the Bremen trade fair "jazzahead!" since 2006. He campaigned for the preservation of Radio Bremen's old broadcasting hall and founded the Friends of the Broadcasting Hall Association in 2002. Since 2009, he has been artistic director of the concerts held there. In addition, Peter Schulze is co-editor of various publications on the history of popular music.
More information: https://de.wikipedia.org/wiki/Peter_Schulze_(Musikjournalist) 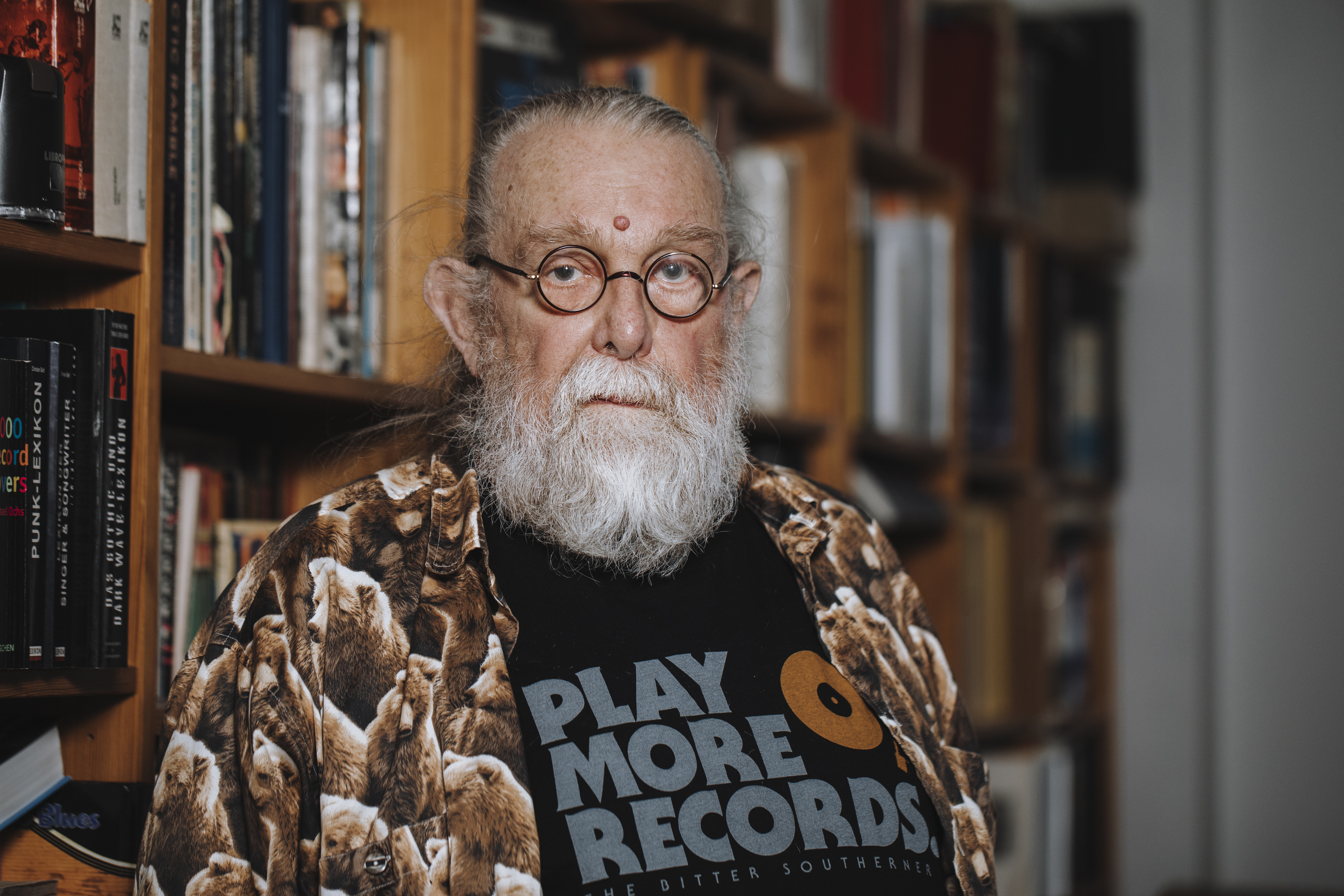 Richard Weize
Multiple award-winning founder & head of renowned music labels as well as author
Already in his teens, Richard Weize (*1945 in Bad Gandersheim/Lower Saxony) began importing U.S. rock'n'roll and country records and building up a semi-professional music trade. Nevertheless, he first tried his hand as a locksmith in an iron foundry, then as a decorator and finally even as a wine merchant in Great Britain. In the early seventies he founded the label Folk Variety Records, then in 1975 the legendary label Bear Family Records (based near Bremen), which he managed until 2016. With Bear Family Records he specialized in high-quality reissues of classics of US and British popular music (country, rock'n'roll, blues, rhythm'n'blues, folk, swing, etc.). But the label's repertoire also includes reissues of German-language singer-songwriter, cabaret, dance and pop music, as well as its own productions. Richard Weize is also the author of books about popular music and labels. He has been honored with many awards for his decades of work, most recently with the Federal Cross of Merit in 2021. Even after the sale of Bear Family Records, he continues to be active as a record label operator (... and more bears, Richard Weize Archives). Since the death of Klaus Kuhnke, at the end of the eighties, he has been a co-partner of the Klaus Kuhnke Archive/Institute.
More information: https://de.wikipedia.org/wiki/Richard_Weize 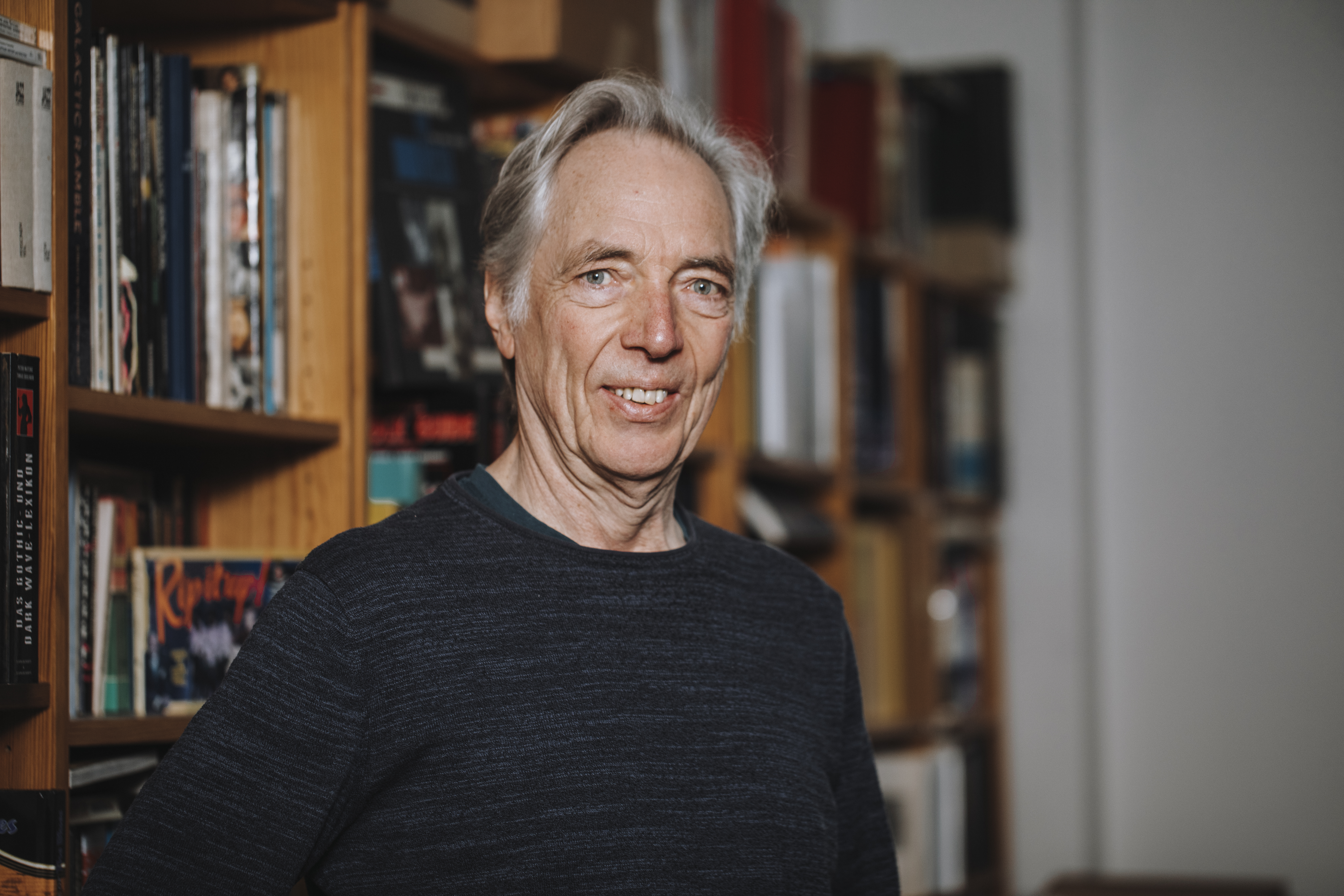 Ulrich Duve
Former head of the Klaus Kuhnke Archive, lecturer & chairman of an IASA country group
Ulrich Duve (*1955 in Herzberg am Harz/Lower Saxony) studied to become a teacher at primary and secondary schools, majoring in music, at the Lower Saxony University of Education in Braunschweig and Lüneburg, and completed a traineeship at a school in Oyten (near Bremen). In addition, he worked as a tour roadie and concert organizer for various artists and bands and was active as a musician himself. From 1985 he worked for the Klaus Kuhnke Archive, since 1991 as its managing director. From 2002 on, he worked as a lecturer for jazz history at the Bremen University of the Arts. Before retiring at the end of 2021, he was also 1st chairman of the Germany-Switzerland regional branch within IASA (International Association of Sound and Audiovisual Archives). Since 2022 he is (designated) co-partner of the Klaus Kuhnke Institute. 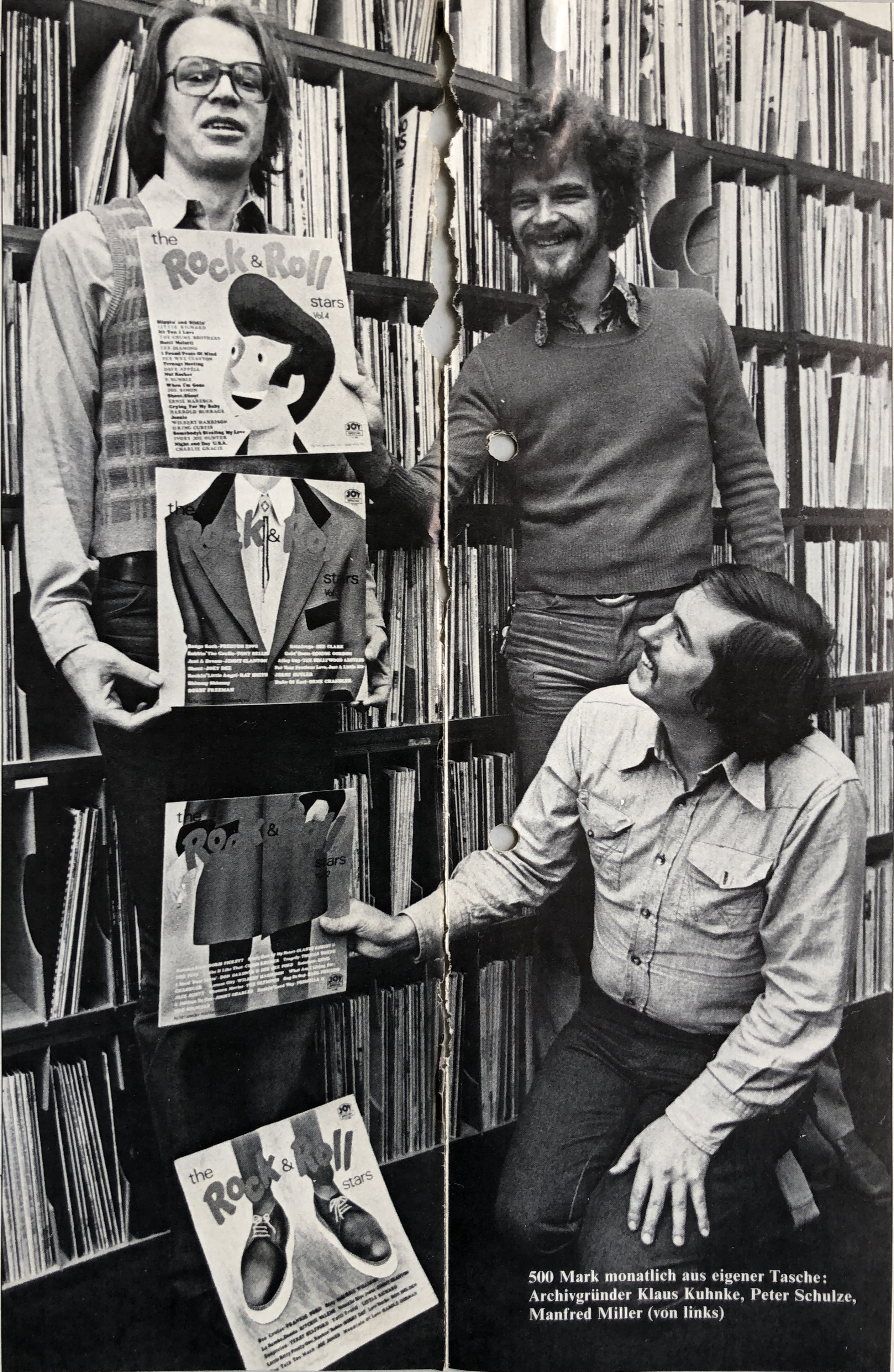 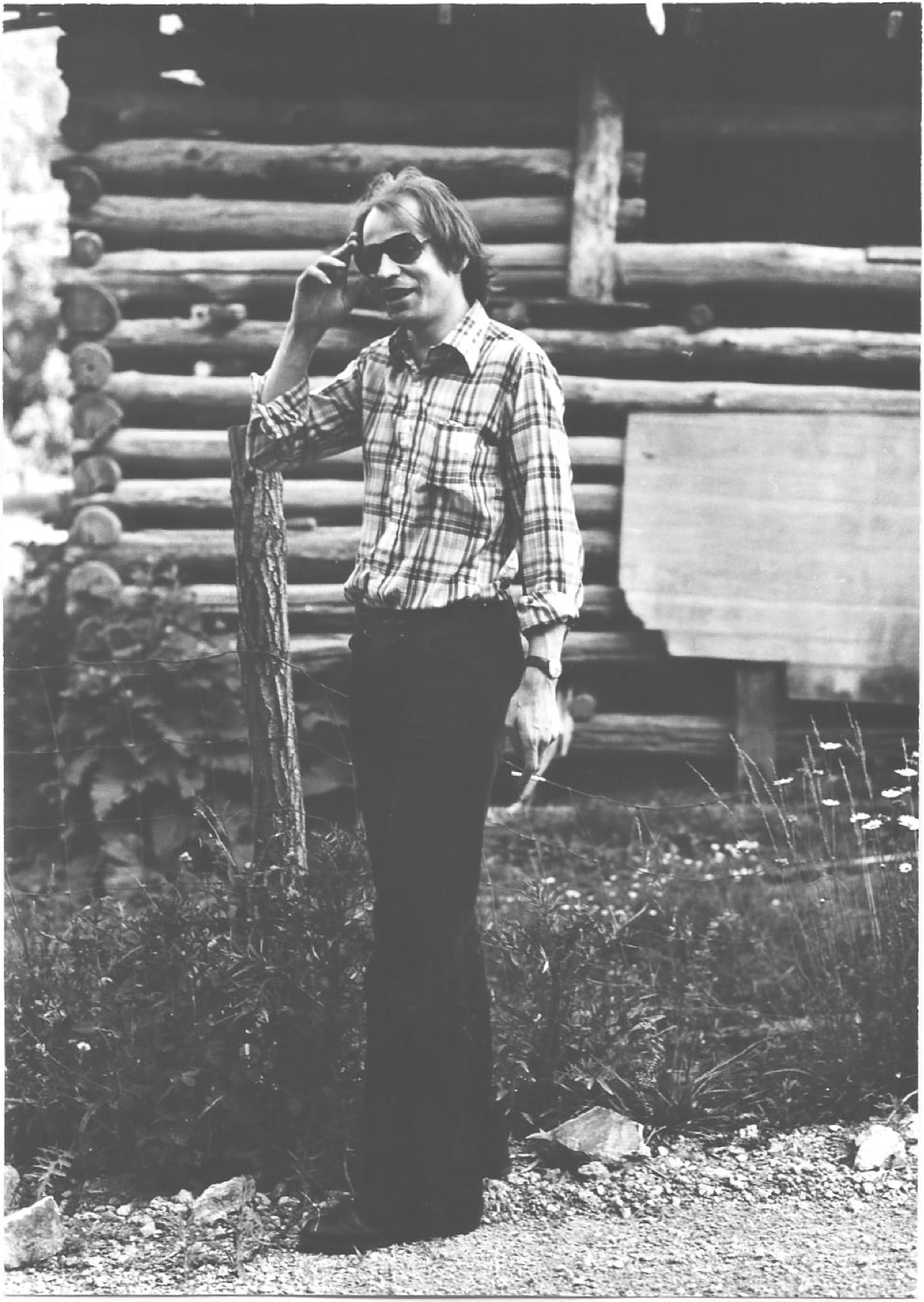 Klaus Kuhnke (1944-1988)
Broadcast journalist, passionate folk song researcher, critical mind & eponym of the institute
Klaus Kuhnke (*1944 in Rerik/Mecklenburg-Vorpommern) grew up in Hamburg and studied German and philosophy at the university there. From 1969 he worked as an editor (including "Die alten bösen Lieder - Lieder und Gedichte der Revolution von 1848") and as a radio and television journalist. He was editor and author of the magazine "Kunst und Gesellschaft" (Art and Society) and co-author of the more than 100-part radio series "Roll Over Beethoven" (Radio Bremen/NDR/WDR) and the 10-part television series "Rock'n'Roll Music" (NDR). Together with Manfred Miller and Peter Schulze, he founded the "Archive for Popular Music" in Bremen in 1975, to which he devoted much time and energy and which became an important part of his short life. In 1988 Klaus Kuhnke died in a tragic swimming accident on the Canary Islands. He drowned, but his body was never found. After his death, the archive was renamed "Klaus Kuhnke Archive for Popular Music" in his honor. He was one of the brightest and most perceptive thinkers in the field of popular music. Chattiness, musically as well as journalistically, was abhorrent to him. He relentlessly exposed stupidity among music creators and in radio and TV music programs. At times, he seemed somewhat brittle and unapproachable to some of his contemporaries. His strength of opinion was legendary. 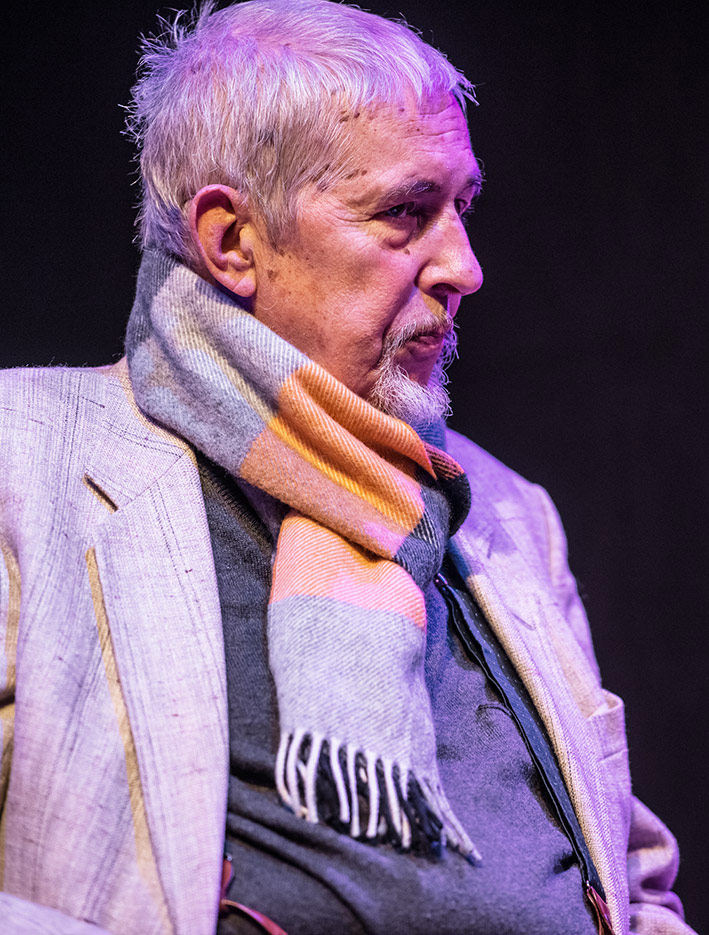 Manfred Miller (1943-2021)
Broadcast journalist, free jazz promoter, blues expert and festival organizer
Manfred Miller (*1943 in Reichenberg/formerly North Bohemia, today the Czech Republic) began studying philosophy, musicology and sociology, but did not finish. Instead, he began working for radio and television in 1962, reporting on popular music, especially jazz and blues. First he worked for Deutsche Welle, then as head of the jazz editorial department at Radio Bremen from 1968 to 1970 in a responsible position. During this time, he also worked as a producer on historic recordings, such as the first two albums by free jazz saxophonist Peter Brötzmann. After a ten-year period as a freelancer for radio and television stations, he worked from 1981 to 1999 as a cultural editor at the regional studio in Mainz of SWF or SWR. However, he had already gained recognition as an expert music journalist earlier, especially in the 1970s. For example, he was involved in the 13-part TV series "Sympathy for the Devil", which was first broadcast on NDR television, and together with Klaus Kuhnke and Peter Schulze he created the extremely successful series "Roll over Beethoven" for Radio Bremen. Later, Manfred Miller devoted himself more to blues music, especially its lyrics and historical context. He had his own radio show called "Bluestime" on SWF 2, wrote numerous liner notes for blues albums, e.g. by Willie Dixon, J.B. Lenoir or Leadbelly, and was co-founder of the Lahnstein Blues Festival as well as its long-time host. Manfred Miller's opus magnum was the monograph published in 2017 under the title "Around Blues and Groove. African American Music in the 20th Century." In 2021 he succumbed to cancer.
More information: https://de.wikipedia.org/wiki/Manfred_Miller

Peter Schulze
Spiritus Rector of the Archive/Institute as well as renowned broadcast journalist, festival & concert hall director
Peter Schulze (*1947 in Bremen/Bremen) first studied sound engineering and composition at the Berlin University of Music before becoming jazz and pop editor for Radio Bremen in 1970 (until 1998). In 1975 he co-founded the Bremen Klaus Kuhnke Archive/Institute (originally Archive for Popular Music) and has been its spiritus rector for decades. For three years he worked as head of music for the cultural program of Radio Bremen (until 2001). From 2003 to 2007 he was Artistic Director of the JazzFest Berlin, was a member of the board of the Europe Jazz Network until 2010 and has been active in the artistic direction of the Bremen trade fair "jazzahead!" since 2006. He campaigned for the preservation of Radio Bremen's old broadcasting hall and founded the Friends of the Broadcasting Hall Association in 2002. Since 2009, he has been artistic director of the concerts held there. In addition, Peter Schulze is co-editor of various publications on the history of popular music.
More information: https://de.wikipedia.org/wiki/Peter_Schulze_(Musikjournalist) 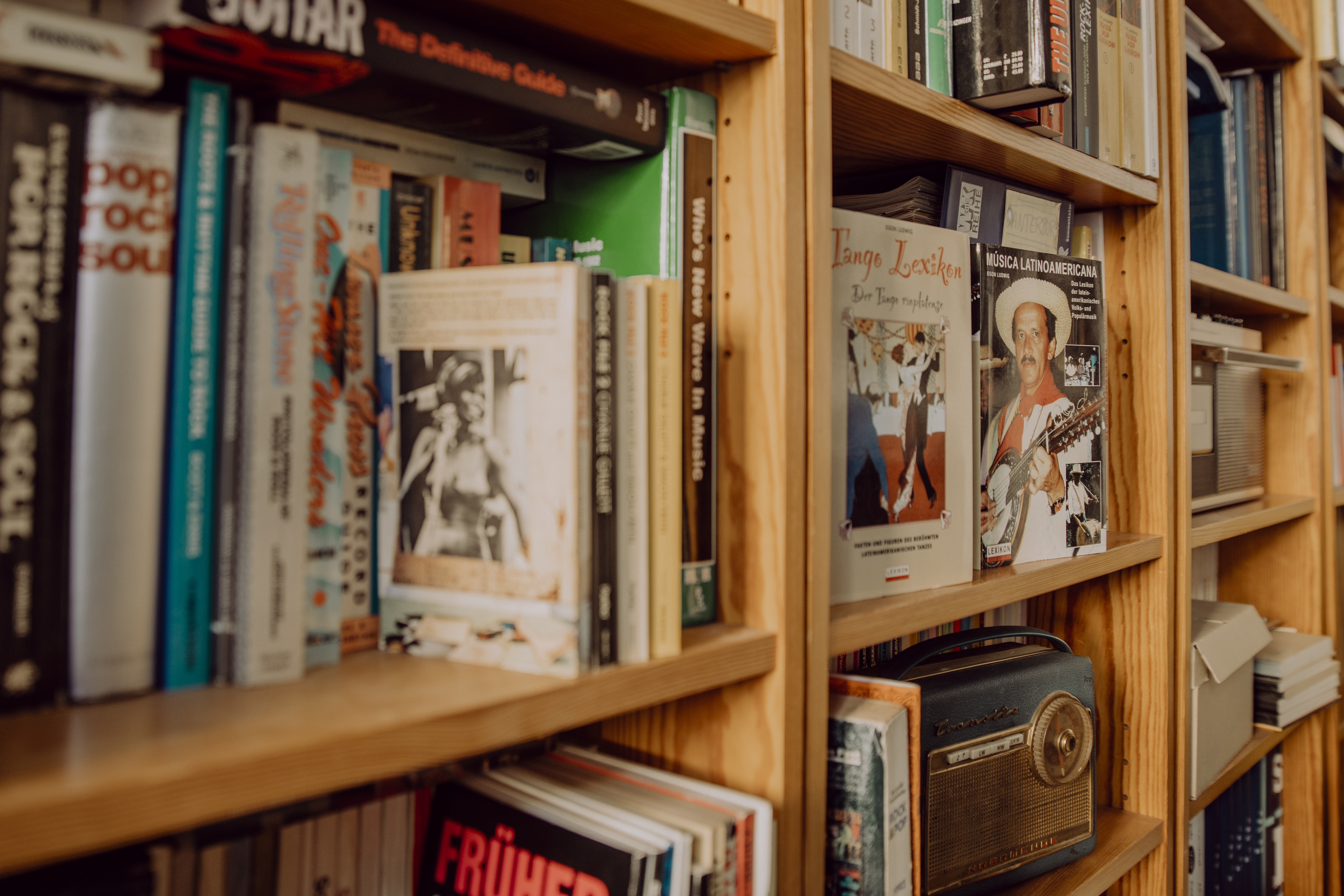 Interested in an internship? Then simply apply with an informal email or give us a call.
We are happy to offer an internship to media and information services specialists (FaMIs) who are currently in training. However, students of all disciplines with an affinity for music can also complete an internship with us (at least 3 weeks, e.g. during the semester break). We are especially looking forward to female reinforcement for our team, of course also for persons who do not want to be assigned to a certain gender. Your sexual orientation is basically irrelevant to us, as is your social, national, ethnic or religious background.

We ask pupils to refrain from applying for an internship position, as our experience has shown that the effort required for familiarization and the expected benefit for the KKI are not in good proportion to each other. Thank you for your understanding.