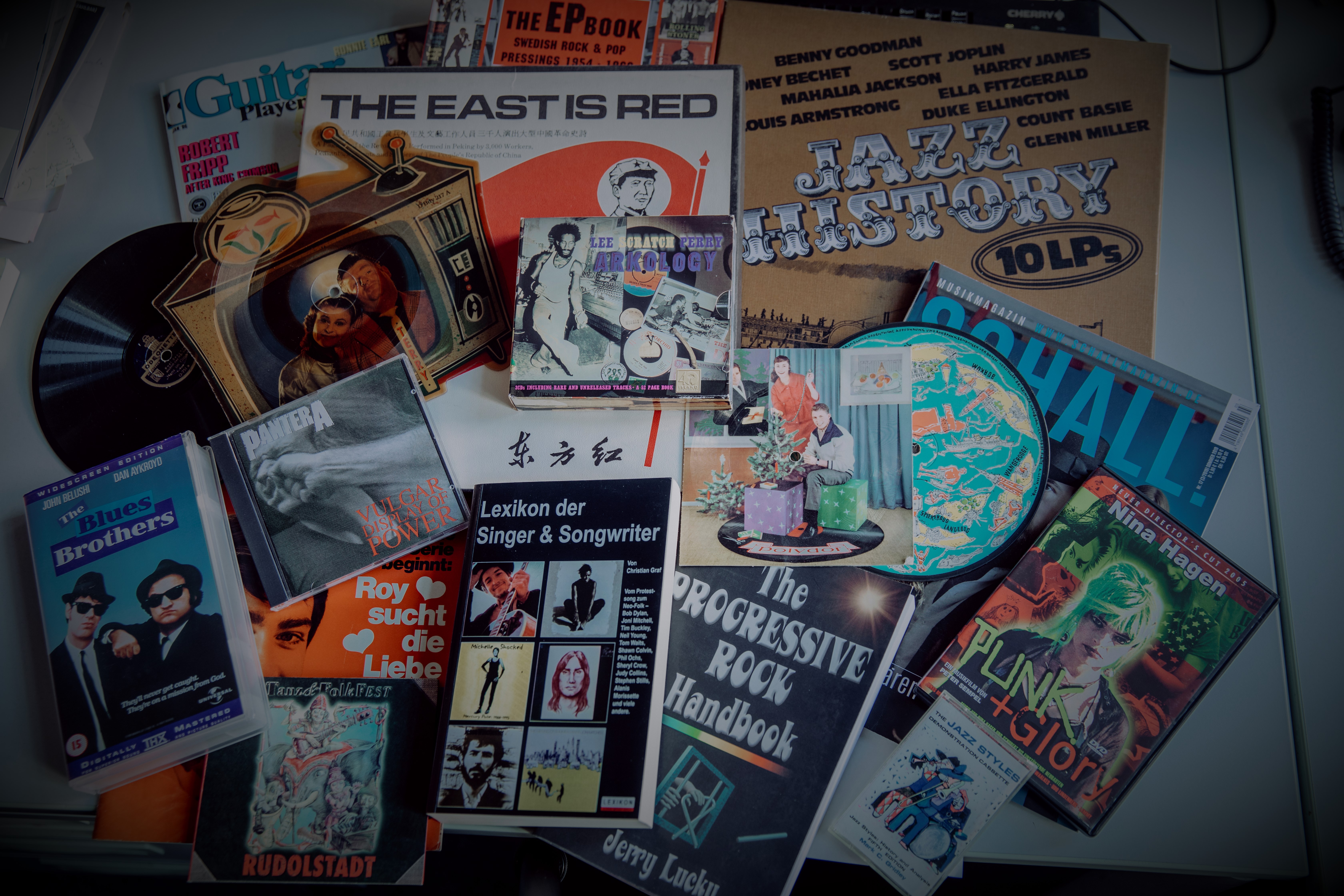 The Klaus Kuhnke Institute is dedicated to popular music. But what do we mean by it? Here is a brief attempt at a definition:

Popular music, pop music or simply pop - no matter how you vary it, it remains a non-word. It names everything and nothing. And yet, unfortunately, there is no better term (at the moment). As is well known, the same applies to early, classical or new music, not to mention so-called world music.

Etymologically, "musica popularis" (Latin) is the music of the people or the masses. The first of six criteria of popular music that we apply is therefore the 1) popularity of a music, meaning the degree of its distribution. If a certain form of music is produced and received by many people, it can be considered widespread or popular. This is a purely quantitative criterion.

The second criterion we operate with is the 2) structural nature of a music. If it is a matter of short pieces of music (or songs or tracks) with an average duration of 3-5 minutes (keyword: radio edit) and the musical structural elements are kept simple (e.g. continuous beat, constant tempo, hardly any differences in dynamics, few changes in harmony, singable melody, repeated lyrics, formulaic structure with verse/chorus etc.), we can confidently speak of popular music. Here, a qualitative criterion is applied, in which simplicity is placed above complexity. Conversely, complex music is long pieces of music with changing beats, different tempos, large differences in dynamics, many changes in harmony, melodies with large intervallic leaps or many "intermediate notes", a lot of lyrics with little or no repetition, and a multi-layered structure made up of disparate elements. Typical of popular music is a high degree of improvised parameters. Notation plays only a subordinate role. The structures of popular music are primarily memorized and passed on with the help of recordings or audio and visual media.

As a third criterion, the 3) historicity of a music can be used. Usually, the emergence of popular music is dated to the mid-1950s. The U.S. singer Elvis Presley is considered by many as the first genuine pop star in music history, which could achieve an enormous and actually worldwide popularity. By the early 1960s at the latest, the Beatles were able to claim this kind of extraordinary world fame, that is, a band from England. But there are also historical attempts at delimitation, which start much earlier. Some interpret the emergence of U.S. blues music (at the end of the 19th century) as a historical caesura, others interpret the international establishment of swing music in the 1920s or 1930s as the beginning of popular music in the narrower sense. Still others see virtuosos of classical or romantic music as precursors of today's pop stars, e.g. the Austrian keyboard player Wolfgang Amadeus Mozart (end of the 18th century) or the Italian violonist Niccolò Paganini (beginning of the 19th century). Sometimes the Austro-Hungarian pianist Franz Liszt is also credited with being (in the mid-19th century) the first virtuoso in music history to have international audiences literally at his feet. In any case, it is based on an understanding of popularity that extended far beyond national borders and was accompanied by media-mediated reporting (either via magazines and/or radio and television).

Another criterion is the 4) mediality of a music. In principle, every form of historical or contemporary music is (was) medially mediated, because every music uses(s) diverse media, be it instruments, voices or writing systems or forms of notation (e.g. notes written down on stone, wood, papyrus or paper). Music automatons or mechanically playable instruments have also been in use for centuries. At the end of the 19th century, however, the invention or use of electricity brought with it new possibilities for the musically applicable generation and dissemination of sound, which unfolded at the beginning of the 20th century and culminated (for the time being) in electronic communication media such as radio and television. These mass media created the conditions for what is today referred to in the narrower sense as pop music (from the mid-1950s). But the establishment of the feuilleton, i.e., the "culture section" of a newspaper in which, among other things, the latest musical phenomena and events are discussed or reviewed, also contributed significantly to the development of popular music in media terms, because specific music journals and magazines emerged from it, which recorded stylistic changes, provided contextual descriptions and thus influenced the self-image and external image of popular music. In particular, technical progress in musical instruments, music production equipment (studio technology), as well as sound carriers and playback devices, has provided popular music with a sound carpet on which it can present itself in glittering sound garb. With the emergence of genuine music films and music videos, the potential of moving images was also exploited to visualize popular music and thus make it even more interesting and memorable. Since then, it has become much more than just music. It appeals to all the senses and makes use of all media. In doing so, it intertwines them in a special way, mirrors them and offers many points of contact. Popular music is often loud, colorful, garish and at the same time ironic. It can be seen as playful media art that is primarily intended to be fun and entertaining.

Last but not least, the 5) cosmopolitanism of a music is a criterion for us to define popular music. While it is common to locate musical styles, that is, to ascribe to them a concrete local, regional, or national origin, on closer examination such narratives turn out to be identity constructions that only suggest unambiguity. In fact, popular music is world art, that is, a global phenomenon that effortlessly transcends political, geographical, and social boundaries. The complicated processes of the transnational art or music market conceal relatively clear economic organizational structures. A few transnational big players divide up this market, above all the three major labels Sony Music Entertainment, Universal Music Group and Warner Music Group, all of which have their (operational) headquarters in the USA. They manage around three quarters of the popular music traded worldwide. Their widely ramified distribution systems are also used by many "independent labels," which, however, want to maintain the appearance of independence and local/regional/national ties to the outside world. De facto, popular music is always aimed at reaching as many people as possible - all over the globe (keyword: global pop). Its function is, in the truest sense of the word, to move or mobilize masses.

Popular music can be perceived both as a simple invitation to dance and as anti-state agitation. It is neither apolitical nor political per se. Rather, it provides a repertoire of musical or sonic forms into which any content can be inserted. The thematic spectrum ranges from romantic love to political resistance. In this respect, the criterion 6) thematic diversity of a music can be applied. Only if music offers occasions for diverse associations does it have the potential to become popular and find many followers.

It goes without saying that popular music cannot be circumscribed in an all-encompassing way with these six criteria, but it should nevertheless be emphasized in order to prevent possible misunderstandings. We also want to emphasize that these criteria should only be understood as general tendencies. There are, of course, exceptions to the rule or deviations from the normal distribution. We do not even want to start with terms or pairs of terms such as unpopular pop music, popular classical music, entertainment music, crossover, light music, commercial music, recorded or produced music or similar at this point. 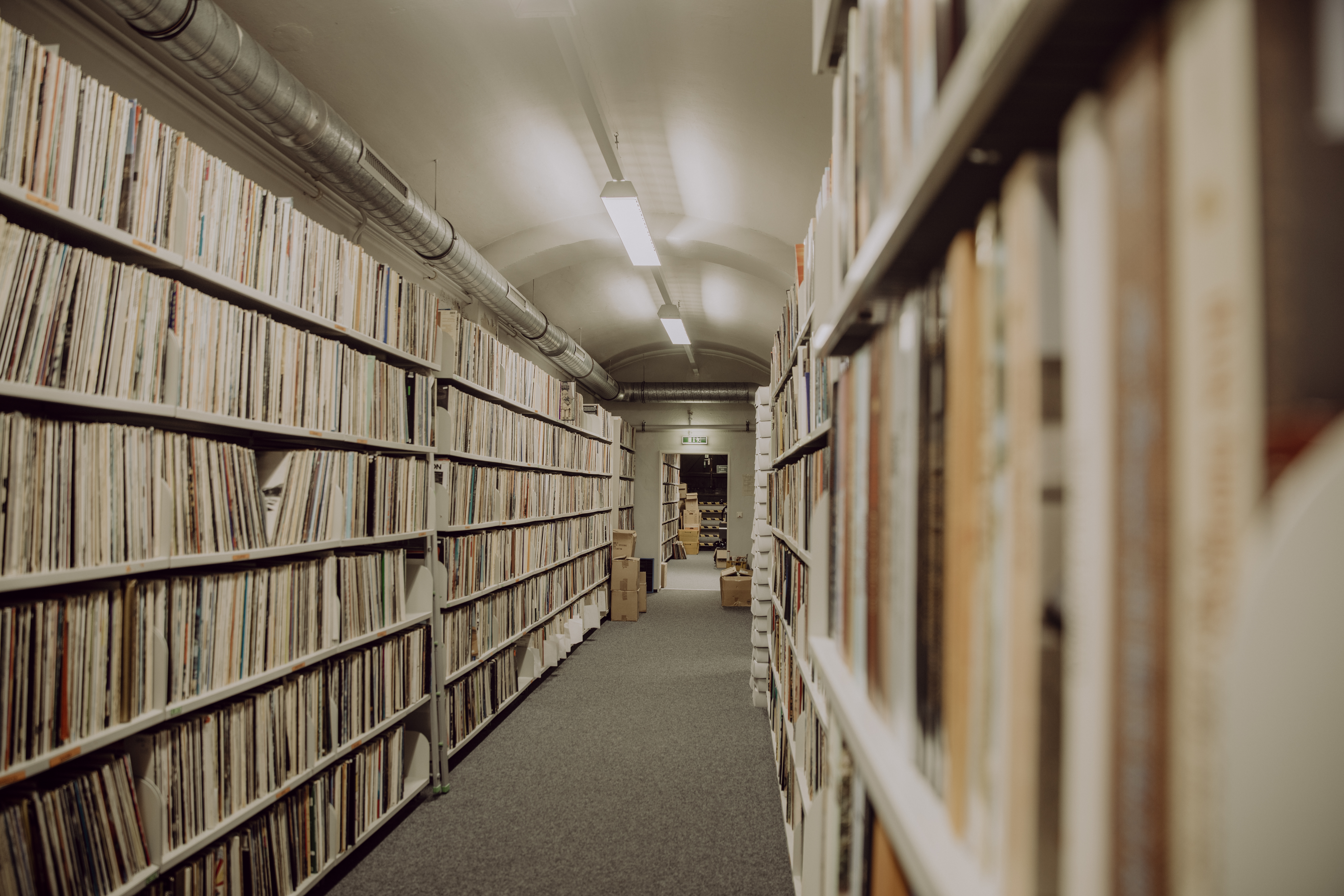 At its core, the Klaus Kuhnke Institute was and is an archive for popular music. All forms or styles of popular music were and are collected, without exceptions. The spectrum ranges from German folk, children's and workers' songs of the 19th century to U.S. blues, jazz and country music from the first half of the 20th century to all varieties of European rock, pop, hip-hop or techno music from the second half of the 20th century. But also current punk, reggae, soul or metal music can be found in our collections. In addition, we have so-called world music in our archives, i.e. music that is popular outside the so-called West and in which traces of a certain region and/or ethnicity are ear-catching, e.g. music from India, West Africa, East Asia or South America. Last but not least, German-language Schlager are just as much a part of our collection profile as French-language chansons, Italian canzones or English-language musicals. Also so-called popular classical music alla Luciano Pavarotti, André Rieu or Richard Clayderman can be found here. In short: We collect almost everything except what is commonly called canonized classical European art music - for that the music library in our house (UA Bremen) is responsible.

Nevertheless, we have collection priorities that came about more or less by chance, since we were dependent on donations in kind from external collectors from the very beginning. Of course, we had no influence on what was collected by these private persons. Especially well covered are the styles Blues, Jazz and Country as well as Classic and Progressive Rock, especially from the Anglo-Saxon area. Of course, popular music from German-speaking countries is of particular interest to us. Materials on national (Germany), regional (Northern Germany) as well as local (Bremen) music are preferentially archived by us.

We collect all types of media. In addition to common sound carrier formats such as shellac records, vinyl records, audio tapes, sound foils, cassettes, CDs, mini-discs or MP3 files, our holdings also include audiovisual media formats such as VHS tapes, DVDs or MP4 files. In addition, we house written and visual material of all kinds, i.e. books, journals, magazines, fanzines, info brochures, broadcasting manuscripts, flyers, sheet music and calendars, as well as some posters, photos, graphics and even paintings. 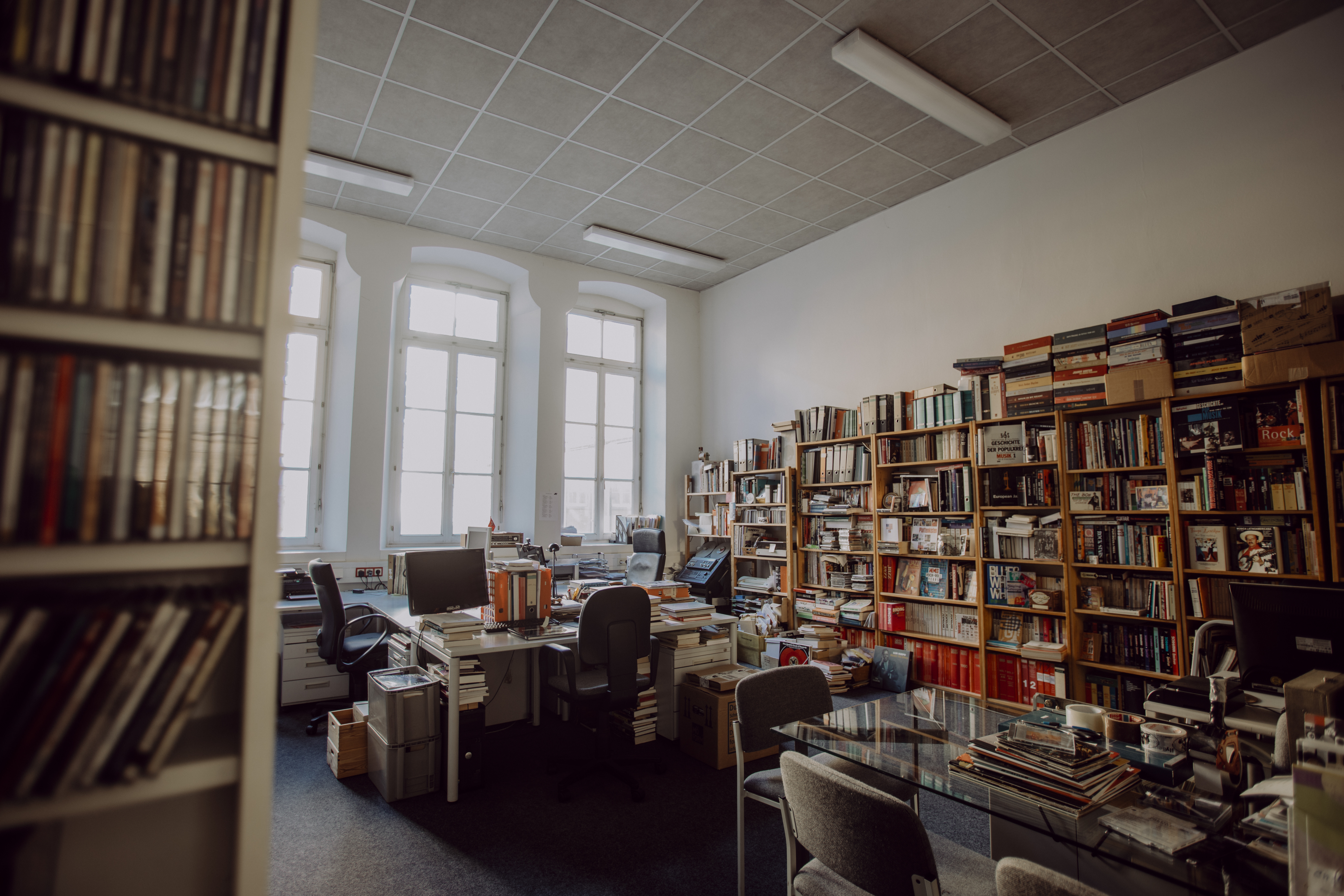 The Klaus Kuhnke Institute is both an archive and a research center for popular music. You can contact us if you are looking for materials for school projects, academic qualification work (seminar, bachelor, master, and doctoral theses) or professional research projects. We also serve citizens of Bremen, tourists and journalists, as long as our work capacity allows it and the requests do not exceed a certain workload, because unfortunately our human and temporal resources are limited.

The relatively new institute designation in our name is intended to make it clear that we will henceforth be conducting more independent research. On the one hand, we want to continue the legacy of the archive's founders, who did pioneering work in the field of popular music research, and on the other hand, we want to actively research our overflowing source holdings in order to systematize them and make them suitable for further research. Furthermore, we see ourselves as a scientific institution, which is obliged to participate in the scientific and public discourse with its expertise. Concrete research projects on self-imposed topics are planned, the results of which will be presented in the form of lectures, conferences, exhibitions as well as our own publications - partly financed by third-party funds. In this way, we want to successively develop the KKI into a center for the research and mediation of popular music. The institutional framework for this is in place.